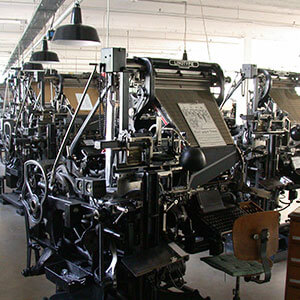 In 1885, German inventor Ottmar Mergenthaler developed the linotype, a typesetting machine. The advantage of this system was that it automatically composed lines of type. It worked in much the same way as a typewriter: the operator composed lines of text by pressing keys on a keyboard. Each key would release a matrix for the corresponding character and this matrix would align with the others. The line of matrices was then filled with molten lead, cast, inked and used to press the characters onto sheets of paper.

Although it is a seemingly elaborate process, linotype significantly sped up printing. It meant that typesetters no longer had to compose lines of print by hand, one character at a time: everything was mechanised.

In 1886, the linotype machine was used for the first time to print the “New York Tribune”, a daily newspaper founded in 1841 in New York. In Italy, it was first used in 1897 to print the “Tribuna”, one of Rome’s leading dailies.

Thomas Edison called the linotype machine “the eighth wonder of the world”, which underlines the importance of this machine in the history of printing.