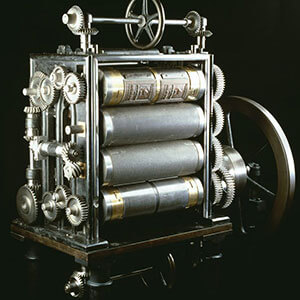 Let’s jump forward again, to the year 1843. We’re in the United States and Richard March Hoe has just invented the first rotary press, perfected in 1846 and patented in 1847. Initially, this system was hand-fed with single sheets until, in 1863, William Bullock introduced a press that was fed by a paper roll: the images to be printed were curved around rotating cylinders. There was no longer a flat surface that exerted pressure to print: instead, the paper passed through a cylinder which exerted a far greater force. Thanks to the mechanisation of the process and the introduction of continuous paper rolls, rotary printing presses could print up to 8,000 sheets an hour. Which makes it the first press suitable for large print runs.

In 1846, the rotary press started being used to print the Philadelphia Public Ledger.